by Comco Sales and Support | Mar 27, 2018 | Comco Updates, Troubleshooting and Maintaining Your System 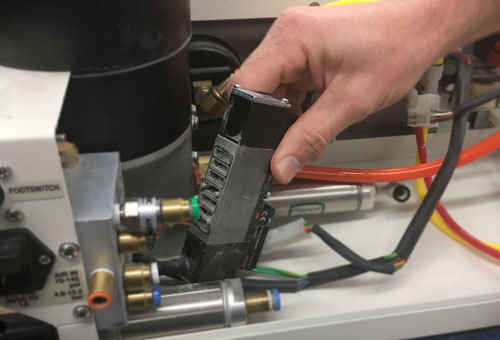 Turn off your Comco blaster at the wrong moment, and you may cause abrasive contamination. Don’t worry, abrasive won’t pollute your shop, but it will spread inside your blaster, infecting sensitive components.

We hate to be alarmists, but a customer’s AccuFlo recently fell victim to abrasive contamination for this reason. Their production stopped for a week while our resident “doctors” performed surgery. Here’s the thing: this damage was easily preventable. 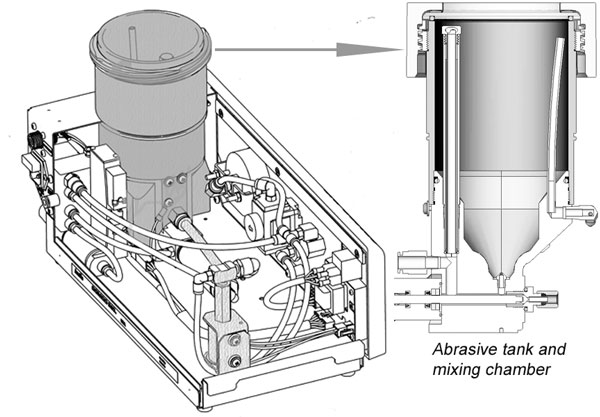 The “dirty air side” of any Comco blaster is designed to traffic abrasive (dark grey) or accommodate an occasional wayward dust particle (light grey). The “clean air side” (unshaded) should remain free of abrasive.

Two Sides to Every Blaster

Your Comco micro-abrasive blaster has two sides: a “clean air side’ and a “dirty air side”. Anything sensitive to abrasive contamination sits pristinely on the “clean air side” of the blaster. For example, the regulator that monitors air pressure and the controls that manage the PowderGate or pinch valve live on the clean side.

The “dirty air side” is designed to withstand the erosive effect of abrasive. The components on the dirty side are either built to traffic abrasive or accommodate occasional fugitive particles. The abrasive tank, the mixing chamber, the abrasive hose, and the nozzle comprise most of the “dirty air side”.

The flow-path for abrasive in a Comco blaster is hard-plumbed, and 99.9% of abrasive particles move in one direction from the tank to the nozzle. We do not anticipate abrasive reaching the modulator; however, in order for it to work properly, it has to have a direct and open connection to the tank and mixing chamber. Therefore, the modulator and the path from the modulator to the tank are designed to withstand the occasional stray particle.

The dirty air side and the clean air side are well-protected from one another. General physical barriers—including a check valve and a filter—provide sufficient blockades as long as air pressure remains balanced.

Our older model MicroBlasters required two separate steps for powering down the blaster and depressurizing its abrasive tank. As a result, proper depressurization was often overlooked.

In the mid-2000s, we reduced the opportunity for operator error by integrating the tank depressurization control into our blaster’s power switch. Since then, turning the power control to off automatically vents our blasters.

What Actions Cause a Pressure Imbalance?

Abrasive contamination usually falls under operator or facility error. A pressure imbalance is created when: 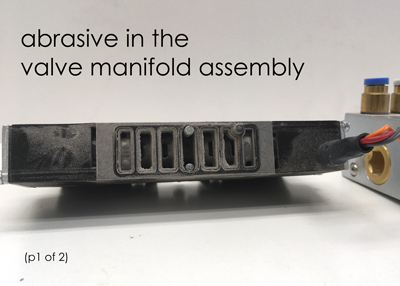 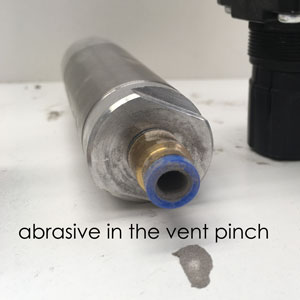 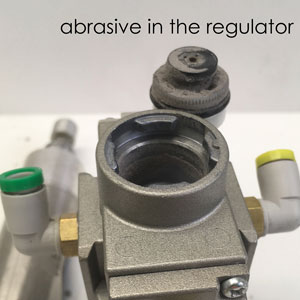 Damaged components on a Comco AccuFlo.

This unit sat powered on over a weekend while the facility’s air compressor was turned off. The resulting pressure imbalance sent abrasive backward through the blaster, clogging and damaging essential components on the “clean air side”.

If your blaster falls victim to abrasive contamination, it will cease to function well. Here are some tell-tale symptoms:

How You Can Prevent It

Prevention is worth a pound of cure, or in this case, worth a week or two of downtime for repair. You can avoid creating a pressure imbalance by: 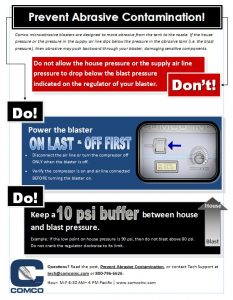 How to Pressurize Your System Properly and Achieve Flow 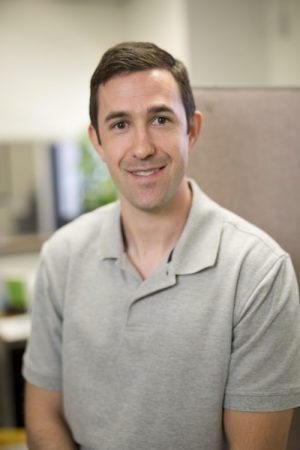